The smell of this mead in progress is awesome. The whole house smells of toffee and burnt sugar, and, inexplicably, brownies, and the delicious aroma lasts for days. Coming home to that smell is a joy.

When it’s bottled, the color is very dark, like a porter, but with incredible clarity. The flavor is a combination of burnt sugar and a kind of almost maple flavor. One friend said it tasted the way a cotton candy machine smells, and I think that’s accurate.

The finished mead, at three months, is a beautiful dark color. The flavor is unique, with spices abounding, and a slightly bitter, almost tannic element. In future batches, I would lessen the amount of spice compared to the proportions I used below, since medieval spices wouldn’t be as potent as our modern ones, not to mention very expensive. I’ll update this post with a photo of the finished mead once I crack open the next bottle!

I think the possibilities with this style mead are countless. Candy apple cysers, toasted marshmallow mead, salted caramel, and something with vanilla. I’d also love to make a fortified version with whiskey. What ideas does it give you?

A Note on Process: I looked at a lot of examples of this brew on forums, including photos and video. I think that many brewers mistake the direction about “black smoke” that appears in some translations as “black honey”, and perhaps overcook the honey. I watched as I brewed for a moment when the honey was forming sort of globules that spat smoke, and with my batch, that happened right around 25 minutes. I was briefly tempted to go darker, but instinctively felt that I was where it should be.

“BOUCHET. To make six sesters of bouchet, take six pints of fine sweet honey, and put it in a cauldron on the fire and boil it, and stir continually until it starts to grow, and you see that it is producing bubbles like small globules which burst, and as they burst emit a little smoke which is sort of dark: and then stir, and then add seven sixths of water and boil until it reduces to six sixths again, and keep stirring. And then put it in a tub to cool until it is just warm; and then strain it through a cloth bag, and then put it in a cask and add one chopine (half-litre) of beer-yeast, for it is this which makes it the most piquant, (and if you use bread yeast, however much you like the taste, the colour will be insipid), and cover it well and warmly to work. And if you want to make it very good, add an ounce of ginger, long pepper, grains of Paradise and cloves in equal amounts, except for the cloves of which there should be less, and put them in a cloth bag and throw in. And after two or three days, if the bouchet smells spicy enough and is strong enough, take out the spice-bag and squeeze it and put it in the next barrel you make. And thus you will be able to use these same spices three or four times.” -Le Menagier de Paris, France, 1393

Before you start this process: Pick a large pot that can handle approximately 4-5 times the volume of honey you start with, as it expands during cooking. Pour 1 gallon of water into this pot and make a mental/visual note of where the level of liquid comes up to: You’ll be reducing the mead mixture to this level in a later step. Pour the water out.

Pour 2.5 lb. honey into a large pot, and begin to heat over medium-high. You’ll need to stir as you go, so have a spoon ready.

As the honey cooks, it will begin to bubble and rise considerably. Take a look at the pictures below of the raw honey level compared with the level at the end. Constant stirring is key to keeping it from getting out of control.

When it gets to a dark color, and begins to spit puffs of steam, I turn mine off. You’ll not go wrong turning it off sooner, but knowing when takes both fierce attention, good instincts, and some luck.

Gradually add the water (careful, it spits like mad as it touches the honey!), then boil the whole mixture until it is reduced to the previously noted 1 gallon level, about 30 minutes in my case. Allow to cool completely, then pour into a carboy and add the ale yeast.

When racking into secondary carboy, add the spices in a mesh bag. Let those soak for 2-3 days, then remove. When the mead is done working, bottle. 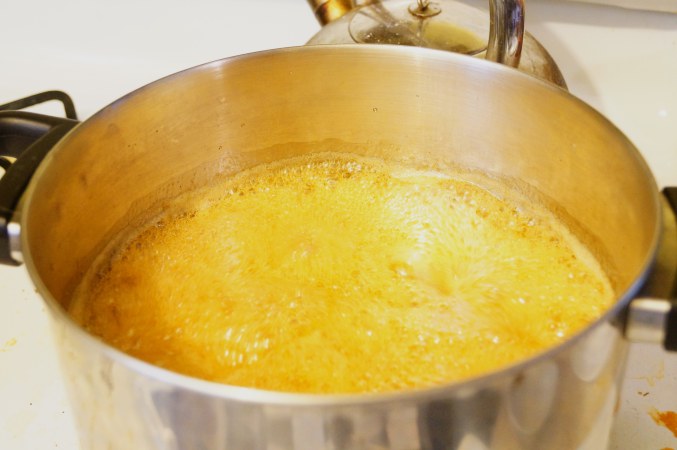