“You may make Hippocras of Cider thus: take of cardamoms, carpobalsamum, of each half an ounce, coriander seeds, nutmegs, ginger, of each two ounces, cloves two drachmes, bruise and infuse them two days in two gallons of the riches sweet cider, often stirring it together, then add thereto of milk three pints; strain all through a hippocras bag, and sweeten it with a pound of sugar candy.” -from Vinetum Brittanicum, 1676 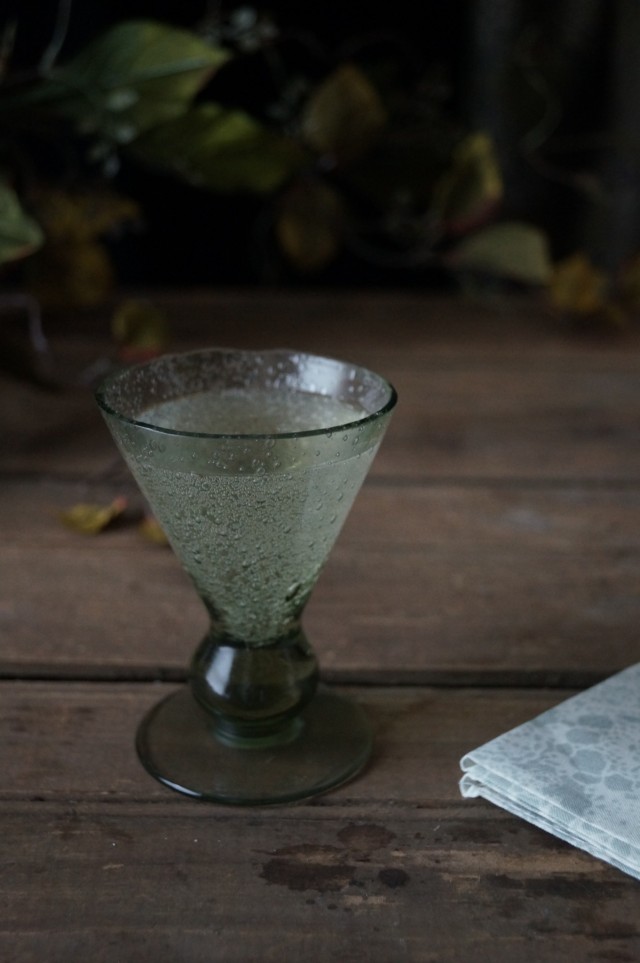 To brew the curious beverage called “Hippocras of Cider”. I had previously added hippocras spices to a Digby cider through an error in reading the original text, so this recipe piqued my interest.

Because the recipe does not mention yeast, I chose to allow it to ferment naturally. While it might have been enjoyed as a non-alcoholic beverage, the fact that it is meant to apparently imitate hippocras nudged me toward an alcoholic version. Because of the high sugar content going in, from cider, milk (the fermentable ones, anyway), and sugar, the beverage had the potential to be quite alcoholic. However, the natural fermentation did not especially take, so the ABV is actually quite low. The flavors are unique and interesting, though, with a tart citric kick and a dash of fizziness.

I couldn’t find carpobalsamum in time to include in this first batch, so I hope to add it in the next. Also, I would like to try raw milk, and see how, if at all, that changes the curdling. Trying the same recipe with ale barm, as most historical brewing recipes call for, would also be something to try, as would aging it on oak chips for a time. Stay tuned!

Recipe for Hippocras of Cider

(Note: I halved the recipe based on the size of my available brewing vessels; my measurements are in brackets.)

Combine the spices with the cider, and allow to sit for two days. Pour in the milk (I had to remove some of the cider to do this, and found the flavor pleasant at that time), and allow to curdle. The milk sediment will sink to the bottom of the carboy. After a day or so, rack the clear cider off the top (the curds make for flavorful pancakes!), and allow to settle again. In my case, a second round of sediment fell, from which I also racked the cider, leaving me with around ½ gallon. I allowed to ferment naturally, and then bottled.

This brew does not age especially well, so it’s best enjoyed within a few months of bottling.

The bulk of the spices can all be found in Gerard’s Herbal (1597), except for the Carpobalsamum, which I have not been able to turn up in any period recipes thus far.

While the direct recipe is post period (not by much, and taking Digby into consideration, perhaps more valid), “hippocras” can be dated back at least to 1300 (Viandier de Taillvent), and brewed cider at least to 1547 (The First Boke). I did round down when it came to the amount of spices, to imitate the relative weakness of well-traveled spices.

I took care to use local ingredients, when available, such as the cider. While, it is a relatively straightforward recipe, I likely took a few liberties with my decision to ferment naturally. In general, old brewing recipes call for ale barm scraped across toast. For modern thoroughness, I did take hydrometer readings.

I’m not sure what the beverage should taste like, as my searches have not turned up a similar beverage. It is only similar to hippocras in that it is a spiced beverage, although I have seen recipes for White Hippocras, which might be closer to this, but that was clarified with egg whites, not milk.

Worlidge, John. Vinetum Britannicum: Or a Treatise of Cider and Other Wines and Drinks. Originally published in London, 1676.